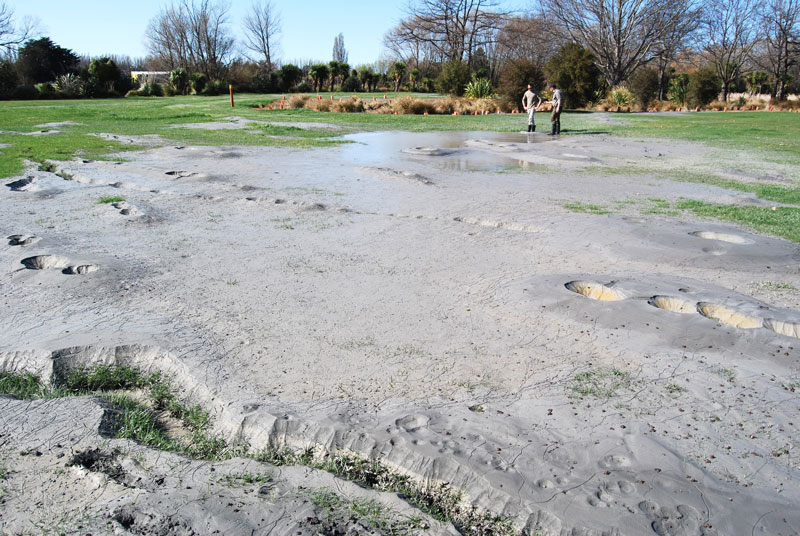 LIQUEFACTION – WHAT IS IT

Liquefaction is the process where firm ground takes on a liquid form temporarily. This generally happens during seismic events such as earthquakes.  Liquefaction can occur anywhere that has seismic activity and where the right soil types are present.

During the Canterbury earthquakes of September 2010 and February 2011, liquefaction caused silt and fine sand to ‘boil’ up and wreak widespread damage. Entire streets were buried, swallowing vehicles and buildings alike. 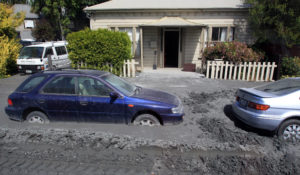 Cars stuck in liquefaction outside Canterbury house after the 2011 earthquake. Photo: stuff.co.nz

Over the course of thousands of years, rivers and streams deposit layers of silt and sand. Low-lying areas such as swampland, peaty marsh and coastal areas have higher concentrations of this silt and sand. The top layer of sediment can become flat, firm and dry – which is ideal for building on. However, the waterlogged layers underneath are often hidden, which causes problems should a seismic event occur.

The severe shaking that accompanies earthquakes and other seismic activity causes an immense build-up of pressure placed on the silt and water particles in these waterlogged layers, turning once firm sediment into liquid. The ground above the liquefied sediment continues pushing downwards, which further amplifies this pressure, causing water fountains and sand boils to burst upwards through any fissures.

The best way to understand how liquefaction works is to think of a coffee plunger. If you were to plunge a coffer plunger down too quickly, the water and coffee grounds will spray up around the edge of the plunger if they are able to find a gap.

Liquefaction can cause damage in a variety of ways. When once-solid ground becomes liquid after being subjected to severe shaking, it loses its ability to support the weight of buildings that are on top of it. This causes buildings on affected land to sink into the ground. Underground services such as pipes and tanks ‘float’ in the liquefied ground and can break. Liquefaction can also cause the overlying ground to spread and crack as the liquid sediment forces its way to the surface. During the 2010 and 2011 Canterbury earthquakes, over 400,000 tonnes of silt came to the surface, covering streets and gardens in several suburbs.

Liquefaction is not just limited to New Zealand. In 1995, the Japanese city of Kobe suffered extensive damage from an earthquake. The port had been built on artificial islands made of relatively loose sand and silt, and many buildings collapsed as a result of the liquefaction that occurred.

Compacting ground that is prone to liquefaction has proved effective in reducing liquefaction hazards. This involves putting large amount of weight on the ground before construction begins. Ground compaction also worked to reduce liquefaction damage in some residential areas of Christchurch during the 2010 and 2011 earthquakes.

Another way to reduce damage in areas at risk from liquefaction is to place buildings on concrete pillars that go through the sediment layers to firmer layers beneath. If the liquefaction-prone layers are shallow enough, they can be dug out and replaced with a firmer fill.

Is liquefaction the end?

Liquefaction is an environmental occurrence which can have dramatic impacts on your house and land. Before purchasing or building, ensure work has been done to safeguard your home against liquefaction. If your home, or an as-is where-is property you are buying has been impacted by liquefaction, contact us to see how we can help restore it.